Discover what industries solar power can be used in.

Have you ever wondered about how solar power works?

Find out how you and your business can benefit from solar.

Ever wondered how solar photovoltaics (PV) work? The solar energy received globally is approximately 1,540,000,000,000,000,000 kWh/year (1,540 peta kWh/year). This is 15,000 times more than the worldwide energy consumption. Did you know that solar energy was first discovered in 1839 by the physicist Alexandre-Edmond Becquerel? The somewhat strange-sounding term “photovoltaics” originates from the driving force behind this technology, the light beam. A light beam consists of very tiny particles called photons that produce an electrical current or voltage.

Generating Power on the Roof 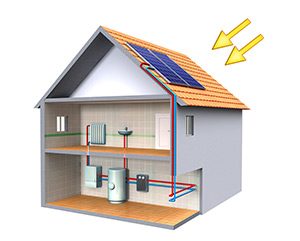 To simplify matters, let’s start by explaining a pure silicon solar cell. Silicon features four electrons in the outer electron shell of the atomic nucleus, the so-called valence electrons. The photons, i.e. the sunlight, bombard the solar cells and enrich the valence electrons with energy. The electrons are finally knocked off the silicon atom and leave a positive atom behind. For the free electrons to move in the right direction and to allow current to be generated, the front surface and the back surface of the cell needs to be polarized differently. So the silicon atoms at the front surface are doped with a minor quantity of phosphorus atoms featuring an extra valence electron. On the back surface of the cell, however, boron atoms with only three valence electrons are added to the silicon atoms. This establishes a voltage difference between the positive and negative pole and allows electrons to flow, that’s how current is generated. A large number of these solar cells put together and encapsulated with glass will then form one of your solar modules.

Most grid tied inverters operate in a fully automated manner. After sunrise, as soon as there is sufficient output generated by solar modules, the control unit starts monitoring the utility line voltage and frequency as well as the energy offer. Once enough sunlight is received, the solar inverter starts feeding the utility transmission grid. Depending on the type of installation, a few watts of solar power will be enough do the job!

What are Applications of Solar Electric Systems?

Solar electric systems are being installed around the world – even in less than sunny areas such as Germany and Japan – to provide energy to homes, schools, small businesses, and office buildings – even skyscrapers! Some electric utilities are installing large PV arrays to generate electricity. Believe it or not solar electricity is even being widely used in less developed countries to power lights and televisions in remote villages, as well as to power refrigerators and freezers to store medications. Also, virtually all military and telecommunications satellites are powered by solar electricity, as well as the International Space Station!

Contact us today to set up an appointment with one of our Solar Advisors: 816-265-1786 or
info@artisunsolar.com

Fill out the form below to find out more about the services we offer.